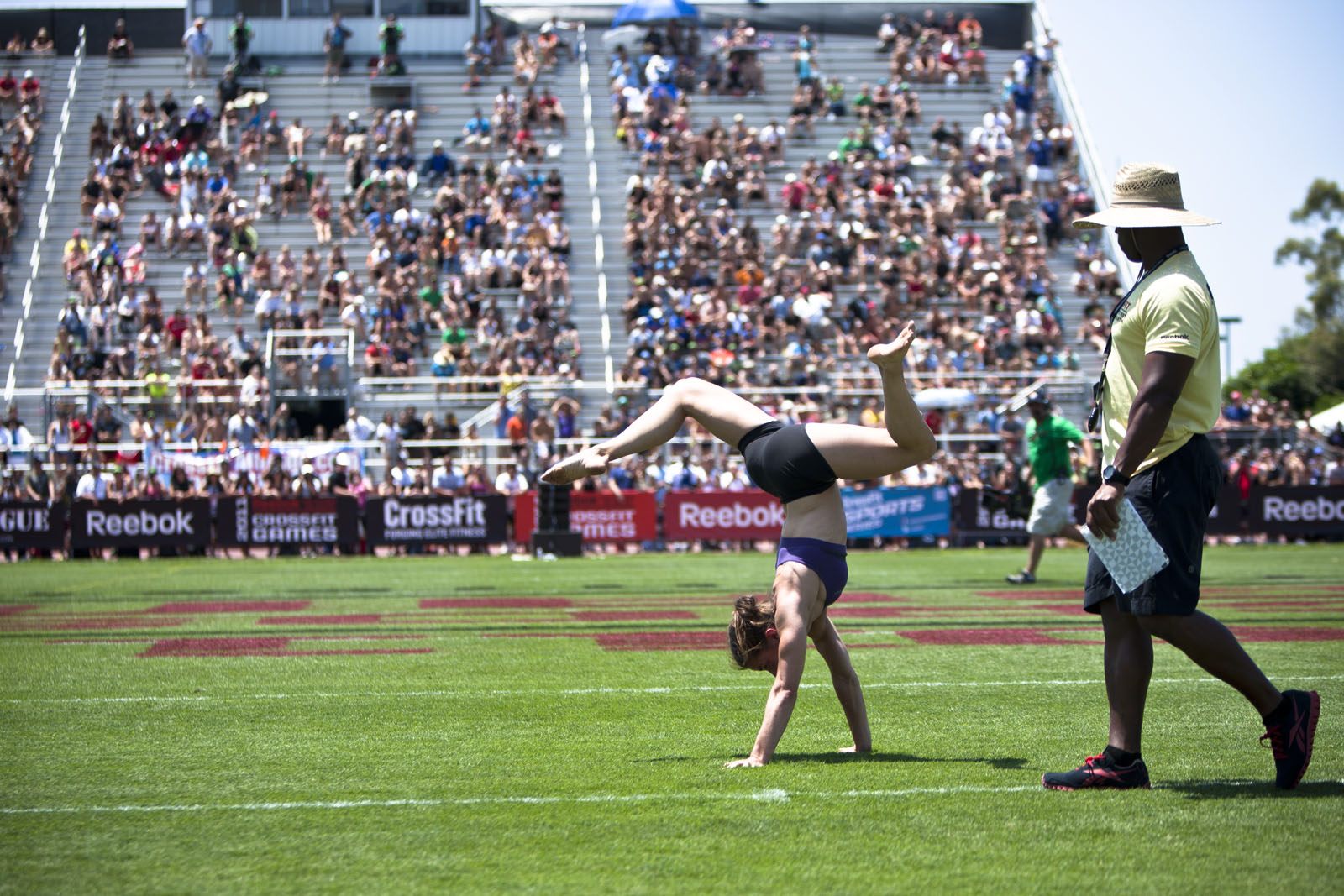 Beyond the whiteboard posted an interesting article last week on their blog. For those of you that don’t know, BTWB is a workout tracking website that’s been around for quite some time now.

Four-time CrossFit Games competitor, Julie Foucher also happens to religiously use BTWB to track her workouts and has done so since she began her CrossFit career in 2009.

So why should you care about BTWB and the fact that Julie logs all of her workouts with their software?

Well, the data provides a really interesting window into the training she has followed over the past 5 years. And why is that interesting? Julie has been to The Games 4 times and on the podium twice… I’d say she’s on to something!

Those of you that are intersted in following in Julie’s footsteps, performing well at regionals and maybe even getting to The Games should be really damn interested. Below, I highlight a few of the insights I gleaned from Julie’s training data that was made public. 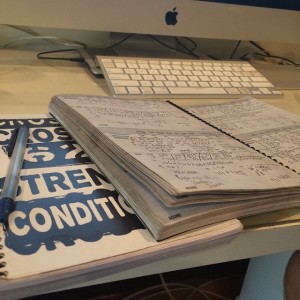 Consistently logging your training may seem like common sense advise, but many people neglect to do so.

Julie says, “I started CrossFit and I have logged nearly every workout I’ve completed over the past 5 years. It has helped me tremendously to monitor my progress over the years and to set new goals. ”

How much should you be squatting for your 5×5 today? Look back at what you did last time. What’s a reasonable expectation for an increase in your press over the next 3 months? Well, how much did it go up over the previous 3 months and are you changing your training up at all?

All of this information can seriously upgrade your training so you’re not blindly approaching your workout each day. You don’t have to use something fancy like BTWB. I use a workout log book (like this), but even a simple notebook will do the trick.

I personally like the action of writing my workouts on physical paper, whenever I’ve tried to use an app or a website I fall off the wagon after a couple weeks. So, just find a system that works for you, whether it be an abacus or a super computer and stick with it.

With athletes publicly posting their training on personal blogs and social media these days it’s fairly common for followers to hop on the band wagon and attempt the same training.

Take a look at the change in volume in Julie’s training over time. She has gradually built up her ability to train at the level she does today. Jump into this today and you will probably get hurt, lick your wounds, jump on to some other random program for a while and continue on this vicious cycle without ever making real progress. 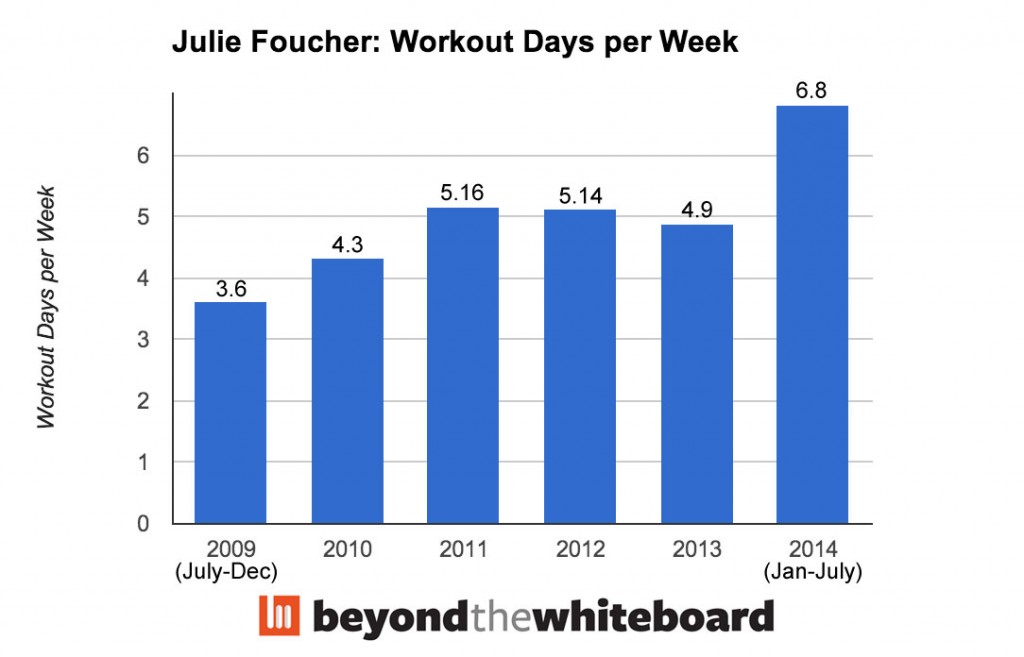 When asked about keys to success, Julie had this to say:

“Having a coach like Doug who is consistent about my programming keeps me consistent. I know I have to get all the work done so I find a way to make it happen. Whether it is in November or June, being consistent with the programming year-round pays off when it matters most in July.”

She’s referring to her coach and the owner of Hyperfit USA in Ann Arbor, MI – Doug Chapman.  For those of you interested in his programming style, he published a book with a full year of his programming.  The exact programming Julie followed to get to the games in 2012 (please refer to point #2 above before purchasing though!).

Julie put her faith in Doug and has exclusively worked with him over the years to developer her athletic potential. She didn’t say, “Oh I do Doug’s program until I get frustrated with my o-lift and then I hop on Outlaw for a bit until I decide I want to improve conditioning at which point I follow OPT unless mainsite looks fun, then I do that.”

It may seem silly, but this is seriously what many of you do. Be honest with yourself. There is no such thing as the “best program.” Find one that resonates with your goals and accounts for your current athletic ability. Find a coach that you trust and then just shut up and do what they say. Don’t be seduced by the secret squirrel club (see #5 at that link).

Getting back to Julie’s high volume training, take a look at the composition of that training. Julie does work out nearly everyday, but a large percentage of that is low intensity, zone 1 work. On top of the Z1 stuff, she also logs a ton of higher intensity aerobic training.

In fact, aerobic work appears to be the cornerstone of her training. So many CrossFitters avoid “cardio” in favor of sexier strength and really tough, short met-cons. If you look at the top athletes though, most of them are aerobic beasts.

This doesn’t mean they have ultra fast 5k times, it means they have a huge aerobic base which is what enables them to do the higher intensity workouts and recover quickly. This is why they can smash Fran and walk away from it, while you and me pass out on the ground and need 30 minutes just to kick the puking sensation (remember those energy systems 🙂).

One theme that is consistent for a lot of top crossfitters is a background in some other athletic discipline.  Julie was a gymnast.  Camille was also a gymnast. Oh, and Annie was a gymnast too.  That’s the top three female finishers from this years Games.  Coincidence?  I don’t think so.

Little good this does you now.  But perhaps this will encourage you to get your young tikes involved with gymnastics at an early age, it will pay big athletic dividends in the future.

So what does it take to become Julie Foucher? Well she has her gymnastics background and is very likely benefiting from genetic predisposition for this stuff, but there are certainly steps you can take.

The themes from the points above… 1) be consistent, follow a program that is appropriate for you and religiously log your workouts; 2) yes, you need to get strong, you need to be powerful, you need gymnastics skills, but you really need a big aerobic engine – make sure aerobic training is a big part of what you’re doing in the gym.

Also, keep in mind, none of us begin as a bad ass… even Julie.  Take a look at a training video from when she was just beginning her CrossFit career.

“Find a coach or a program you trust, and then commit yourself fully to it for a year. Too many people start to question their program or jump from program to program choosing what they think they need to do. You don’t know the effects of a program unless you do it fully for an extended period of time. After a year you can re-evaluate and decide where to go next. Also, find workout partners who are reliable and who you will have fun in the gym with – the people you surround yourself with make all the difference.”