NPGL: Exciting as Hell and Definitely Not CrossFit 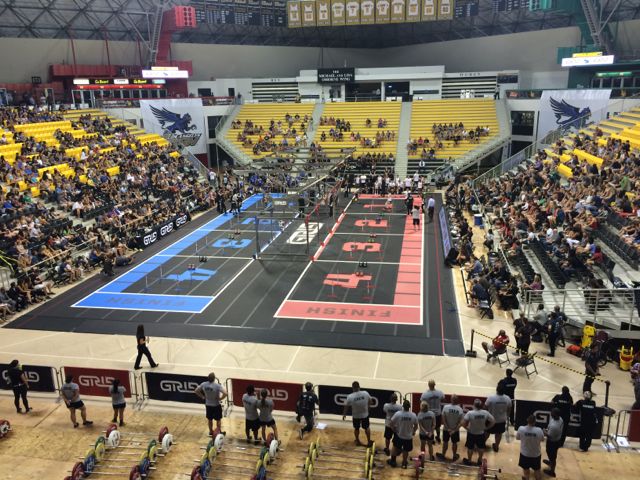 Last weekend I went to check out the first home match for the Los Angeles Reign, my local grid league team. Grid league, what the hell is that? Maybe you’ve heard of NPGL or perhaps their former name, NPFL.

All of these monikers refer to the same thing, a sport of team fitness. Isn’t that the same as the team element of the CrossFit Games? I wasn’t sure of the answer before checking out my first match either, but now that I’ve witnessed it, I can respond with an resounding no.

While there is a great deal of overlap in the movements, The Grid League is something entirely different than CF. The CF games bills itself as the proving ground for the fittest individuals and teams worldwide, this is not the intent of The Grid League.

The NPGL matches are truly a team sport, something you might not get until you observe one yourself. Lucky for you, they’re all available online through their website too and I highly encourage you to check ’em out.

Each match pits two (of the currently 8 teams in the league) together in a head to head battle.

Matches can take on a series of formats, the one I watched was called McKinley, which refers to the specific set of workouts that makeup the match. In McKinley, there are 11 workouts (or actually races as NPGL refers to them), ranging from 4 to 8 minutes in duration. Below is a time lapse video I shot of race 9, to give you a better idea of the format.

In this particular race, three female team members work together to complete the necessary reps – the team that finishes first takes the points for that particular race. This isn’t always the race format. Some have everyone on the team working one at a time, like the thruster ladder, some have a male and female participant alternating like the clean and jerk + jumping pistol workout, and the list goes on.  At the end of the match, the team that accumulates the most points from race wins, gets the overall win and takes the match.

The interesting thing about these different race formats is that it makes the role of a specialist very important to the sport. In CrossFit the goal is for everyone to be a generalist, but there were numerous workouts in the NPGL match where a super powerful athlete, like Danny Nichols was called in to throw some big weight around or a gymnast like Valerie Calhoun sent in to bust out CTB pull-ups (which you can see below) and free standing hand stand push ups. It truly is a site to see the specialists do what they do best.

The other thing they’ve done a spectacular job with in the Grid League is keeping things moving quickly. If you’ve ever been to the CF Games, Regionals or another local fitness competition you’ll know that these events are typically filled with an enormous amount of downtime.

During the grid match, each workout was very brief and the time to reset between workouts was equally brief, often lasting only 5 minutes. This fast pace keeps things exciting.

One other element that keeps things exciting is how the workouts are programmed to be close. The time lapse video above shows the workout win with the largest margin of victory of the evening. Most actually came down to the final seconds, bringing the crowd to its feet each time.

The Grid League scoreboard is also a really great feature. Again, if you’ve ever been to a fitness competition you’ll know it’s often difficult to tell who is winning. How many reps do they have left?

This mystery is solved with the grid scoreboard which provides a realtime depiction of which team is in the lead, how many reps remain, how much weight has been lifted, etc. The only curious item left off the scoreboard was the current, overall score for the match. I found myself having to go online with my phone to figure this out – I’m sure they’ll get these types of oversights worked out over time though.

Fellow 626 Coaches Making it onto the Flex Cam

I wasn’t sure what to expect out of the event, but I ended up having a fantastic time and so did the others that came along. The workouts provided quite a lot of excitement. I found myself invested in the outcome of each one, getting worked up and cheering on the teams – something I completely didn’t expect.  And like I mentioned above, the crowd was brought to their feet numerous times during the evening.  This is a pretty incredible feat considering this was the first home match of a brand new sport and the fans really aren’t emotionally invested in the outcome yet.

It’s also clear that the league is sparing no expense, they’re putting a lot of money, time and effort into these matches. The Walter Pyramid at Cal State Long Beach was all decked out for the event. Life size decals of the team athletes were on the windows, huge banners were strewn throughout the venue and the actual grid was very nice looking with official judges, score keepers, media team, etc.

The audience in attendance was very clearly made up of crossfitters. I’m not sure how likely it is that the sport will expand and grow to interest those that aren’t participating in fitness right now, but I think it has a chance to do so based on how exciting I found it to watch. Regardless, the fitness community is huge, largely based on the explosive growth of CF, and these individuals will love the sport if they give it a shot. I think there is a high probability of this thing taking off.

What is clear, the NPGL is not crossfit nor does it try to mimic CF.  This is a completely new sport that is really exciting to watch and it should be really interesting to see how it develops over the coming years.  I’m hoping to make it back out for the final home match of this season in a week and a half to see LA take on San Francisco.  If you have a local team, I definitely recommend checking it out!