The Best Lift For Improving Your Back Squat & Your Backside…[Hint, Hint, It Ain’t A Squat] 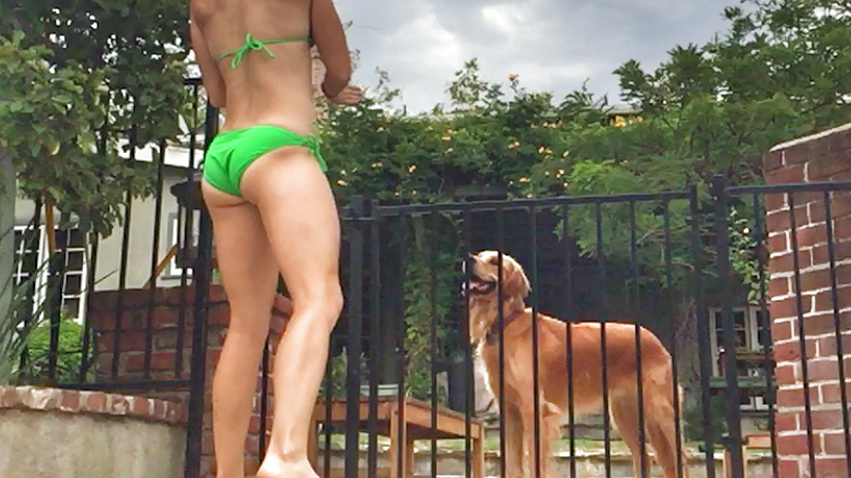 “You can do side bends or sit-ups, but please don’t lose that butt…”

Not to be vain, but nice asses are pretty rocking’…and how do you get that?  By lifting- and lifting heavy.

Strong glutes shape the backside like none other and makes your jeans, yoga pants and dresses rockin’.  And there’s nothing like a dude with a nice butt, right ladies?

We’ve all been told squats are the key to booty success and strength gains…but is that true?

Everyone loves squats, and rightly so, they’re one of the most all-encompasing lifts for overall strength and body composition improvement…but is there something better?

Let me introduce you to my dear friend the BARBELL HIP THRUST.

I’ve been incorporating hip thrusts in my training as well as my clients’ training for the last year as lower body accessory work, so I was stoked to hear well-known trainer and strength researcher Bret Contreras (aka- the “Glute Guy”) has been testing the theory of squats vs hip thrusts for glute and squat gains…

His six week study included 2 identical twin subjects put on identical nutritional regimens.  One twin was given a protocol of hip thrusts 3 times a week, while the other twin was placed on a comparable back squat protocol.  (You can read more details of the study HERE.)  At the end of the 6 weeks, both ladies tested their 1 rep hip thrust and back squat, along with EMG studies assessing glute hypertrophy.

And the research is in.

Both ladies gained strength and glute mass, but the hip thrust twin saw greater gains.  Even more impressive, the twin on the hip thrust protocol still saw a 42% improvement in her 1rm back squat even though she didn’t perform a single squat during that 6 week study.  (BTW- her 1rm hip thrust went from 195# to 315#- holy sh*t!)

“What fascinated me is that the twin that performed hip thrusts didn’t perform a single squat during the six weeks. She never even performed a bodyweight squat during her general warm-up. Her 1RM at the beginning of the test was 95 lbs, but at the end of the six week hip thrusting protocol, she could squat 135 lbs with better form. It just looked cleaner and smoother.” – Bret Contreras

Now of course, this was a very small study (N=2), BUT this was the first study comparing the barbell hip thrust vs the back squat for glute hypertrophy…future larger studies should give further insight on both hypertrophy and strength.

Whether you’re interested in squatting heavier or the pure vanity of booty gains, the barbell hip thrust might just be something to incorporate into your training routine.

…because I like big [strong] butts and I cannot lie.