I spend a lot of time reading, listening, watching and learning through internet content on health and fitness topics, but outside of certifications, I’ve never been to a live event. That is, up until last week, when I attended the 2014 Ancestral Health Symposium in Berkeley, CA.

Conferences aren’t new to me, in my previous life as an engineer, I actually attended (and even presented at) quite a few. The thing is, I never felt like I got much out of them.

I was interested in the conference topics, but I guess I never really felt engaged. I would watch speakers in my niche, perhaps learn a few things, and then scurry off to my hotel room to work or watch Seinfeld reruns on TBS.

My experience last week at AHS was much different. Not only was I much more interested in nearly every talk on the program, but I had incredible, meaningful conversations with many of the other attendees. Overall, I learned a lot, some from the talks, but most from conversations held between sessions and over dinners. 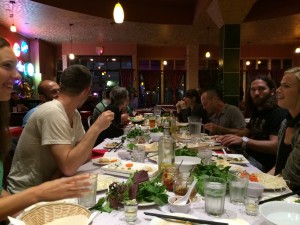 I think this is what the engineering conferences must have been like for others.  Now that I’m attending a conference on a topic that is deeply important to me, I now have a greater purpose – to bring home the information gleaned, process it and share it with the members of 626 as well as all of you other readers out there.

Even discounting my deeper interest in the subject matter, the one thing that I truly felt was unique about AHS as compared to every other previous conference experience of mine was a complete lack of ego amongst the attendees and the speakers. So often people take a position and staunchly defend it from that point forward, discounting conflicting information as erroneous without examining it.  At AHS though, I experienced people openly questioning ideas deeply entrenched and mostly held as truths by the ancestral health community and these questions were embraced – they weren’t booed off the stage.

So, if you’re an internet health and fitness geek like me, I recommend getting out and experiencing something similar, perhaps AHS15 which will be held in Boulder, CO.

Now that I got my gushing over the conference out of the way, I thought it’d be interesting to highlight a few of the talks that I really enjoyed and provide links for those of you interested in learning more on those particular topics.  If you’d like to watch the actual talks, they’re available for free on the AHS youtube channel.

What can I say… this talk, though brief was fantastic. It was a 20 minute exploration of early research on ultra high carbohydrate diets. That’s not a typo, 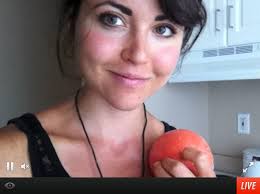 high-carb. Though these ideas are contrary to what Denise espouses on her blog (like her post on the China Study) and in her book. She is still willing to question her own beliefs and consider the possibility that there may be multiple diets with which humans can thrive.  There were no answers, but great questions.

The Under Appreciated Role of Muscle – Jamie Scott

It was refreshing to see Jamie preaching the importance of muscle mass. He discussed the interesting point that our society often considers body composition in a binary fashion – fat or not fat.  The fallacy is that the external appearance of fat or lack of fat says very little about overall health, which is truly what we are in pursuit of, right? This also tied in well 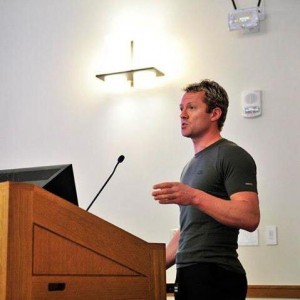 with the interesting statistic reported by Skyler Tanner which is that while baby boomers will live longer than their parents, they will experience the onset of chronic, debilitating conditions sooner. Is the ultimate goal to simply extend life (even if it’s as a shell of a person) or is the goal to function well and avoid disease into our late years?

How we Got Fat – J. Stanton
Stanton’s talk was an interesting look at the obesity problem from a bottom up perspective – starting at the cellular level. It is well documented that as we gain body fat, our body creates more fat cells to store it. And during weight loss, we’re not loosing fat cells, our existing cells are shrinking. The issue is that each individual fat cell isn’t aware of how many others exist.  As the cell shrinks, it regulates leptin levels to indicate to the brain that you need to eat because your fat stores are being depleted (a survival mechanism).

With all of that setup, the premise of the talk was that as overweight individuals loose body fat, their fat cells begin signaling to their brain with leptin. This triggers hunger and makes it incredibly difficult to maintain weight loss.  This is one of the reasons why loosing weight is so difficult and the number of times an individual has been on a diet is predictor of how unsuccessful they will be at loosing weight and keeping it off. This whole discussion tied in well with Stephan Guyenet‘s talk on leptin resistance.

Last, but not least was Nora Gedgaudas’ talk on adrenal fatigue.  This was an especially interesting talk to sit through as I see the signs of adrenal fatigue in numerous individuals at 626 (and the crossfit community at large).  Many things can lead to adrenal fatigue, but one of the big triggers is overtraining.  Another reason why more is not better in exercise.

There are many different states of adrenal fatigue, but one presents with chronically elevated cortisol levels keeping the body in a catabolic state, which makes muscle gain extremely difficult.  I’m definitely going to be researching this topic much more extensively and plan to put together some future posts on this, as I think many of the folks reading this site would greatly benefit from the information.

The above is just a very brief sampling of the great material covered at AHS.  When I think back to all of the content as a whole, one theme jumps out.  As humans, we struggle with numerous conditions that are detrimental to our longevity and our ability to thrive.

These conditions are often self inflicted and can typically be reversed by focusing on just few things: 1) eat whole foods, 2) be active, 3) minimize stress and 4) get adequate sleep.  We try to over complicate things, but it truly is that simple.  So do yourself a favor and make sure you’re paying attention to those four areas of your life!